I was reading a magazine in the doctor’s waiting room today and stumbled across an interview with astronaut Chris Hadfield. I’m a little embarrassed to admit this, but I don’t know much about the guy. I’ve read a few things here and there which would lead me to believe he’s a pretty cool dude, but I didn`t know much about him or his accomplishments.

Anyway, he gets into talking about his career and what inspired him to want to become an astronaut. As a kid, all he wanted to do was walk on the moon. From what I gathered in the interview, he still hasn`t stepped foot on the moon. He`s learned so many other amazing things and met so many fucking cool people in his long career, but he still hasn`t actually crossed that one thing off his bucket list that inspired him to embark on the career that he did.

As with most people, I’ve been looking back on this past year and reflecting on it. Did I accomplish all the things I set out to do? Fuck no. Did I set the bar WAAAAY too fucking high? Fuck yes. I somehow thought I was going to release 4 fucking books this year. There`s professionals who have been working in comics for decades who aren`t even capable of that output. Do I need to feel ashamed or like a failure for having not achieved what I set out to do?

I feel like a lot of us creative types have the tendency to get lost in our work. And we set unrealistic deadlines for when we want to finish projects, without remembering to allow time for anything that isn`t work.

I know for me, the scariest part of this is that I`m not even aware of how much I`m missing out on. Whether it`s experiences with lovers, friends or family, there is so much to experience, and if you miss it now, there isn`t a second time around to enjoy it.

When 2014 began, I had no fucking idea that I would plan my first comicon on the road, plan my first art show, throw surprise birthday party, become a sponsor of the Winnipeg Roller Derby League (and meet a bunch of cool fucking people in the process), launch a clothing company with my girlfriend, take a road trip to BC, get engaged to aforementioned girlfriend, fuck around with 3d art, draw artwork for Cyrus from the Trailer Park Boys, be interviewed by CBC, CJOB and more, have one of the best fucking Christmases ever with my niece and nephew, and get to enjoy a bunch of time off with my fiancee and my future in-laws.

So here I am, looking back on the past 365 days. I`m closer to achieving my original goals than I was at the beginning of the year, but I`m still not where I thought I`d be now. For the first time in my life though, I don`t feel like beating myself up for it. I`m so thankful for all the people who I got to share my year with, and I finally understand the importance of balancing life and work.

There are so many twists and turns you can take, in whatever profession you choose. In creative professions where you have more freedom to move around and call the shots, you`re allowed to have a grand, pie-in-the-sky vision for your future. I have embarrassingly big plans for some of the things I want to create in my life time. This has given me a sense of purpose and direction, but I understand now that it truly is about the journey. We`re allowed to be dreamers and to want something we don`t have yet, and we`re allowed to invest in ourselves.

Most importantly, we`re allowed to take it a little easier on ourselves for not accomplishing everything we set out to this year. After all, we need something to shoot for in 2015.

Catch you guys on the flip side, 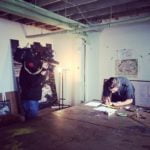 About the Author: Nyco Rudolph